Father Dominic Peluse brings compassion, joy and an abiding devotion to the Sacred Heart to his role as Spiritual Director.

Originally from Poughkeepsie, NY, he is the second of three boys in a devout family. Deciding to pursue his vocation upon graduating high school, he visited a seminary operated by the Priests of the Sacred Heart – and in a matter of days had found his home.

“There were such wonderful priests and brothers at the seminary. They talked about Fr. Dehon and about the Congregation. The more I learned, the more I wanted to be part of them,” he recalls. In 1967 he professed his first vows. He was ordained in 1974.

“Except for a short time doing vocation work, most of my priesthood has been in parish ministry. I really loved it; being in a parish, making friendships, being part of people’s lives in both good times and bad. It is a way that we can be Eucharist to others.”

Fr. Dominic’s pastoral experience underpins his role as Spiritual Director. “It’s just that now the congregation is bigger,” he chuckles.

“Being present to others and being supportive is a way to give joy and hope. You can’t buy joy, but in giving of yourself you receive joy. That’s what I learned in parish ministry, and that’s what I bring to my work as Spiritual Director.”

Fr. Dominic enjoys meeting benefactors and sharing with them as much as he can about the SCJs. He feels blessed to be able to visit SCJ missions around the world and get to know the people served by the Priests of the Sacred Heart. He’s proud of the Congregation for its ministry among the poor and needy, and for its spirituality. 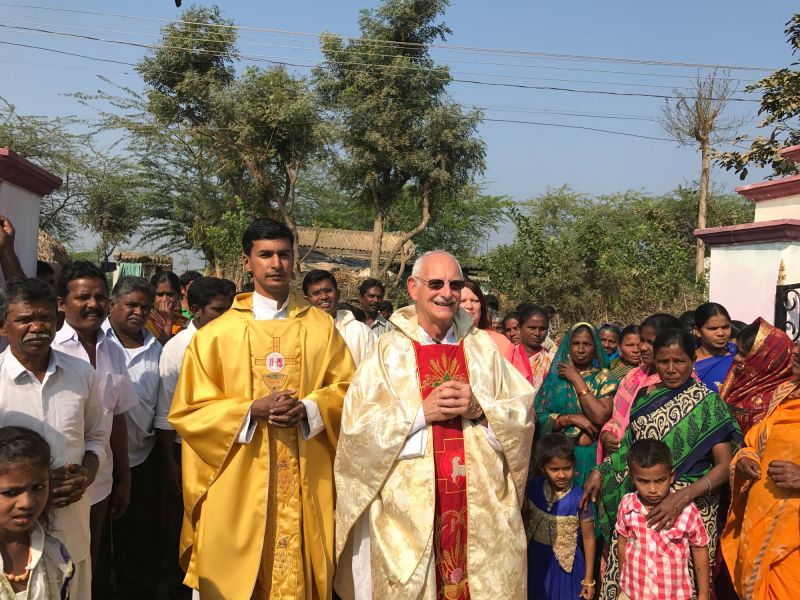 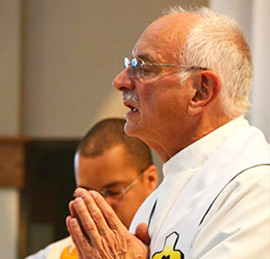 Join Fr. Dominic in a prayer to the Sacred Heart of Jesus.

Dear Friend of the Sacred Heart,

True devotion to the Sacred Heart of Jesus takes more than love and piety – it takes courage.

As we attend our parish church, we have the opportunity to pour out our love for God in prayer and feel the presence of Jesus in this sacred environment. It is a true blessing. At the end of the Mass we are sent out to be the living Gospel to those in need of His Word. We are called by God to acknowledge the presence of Jesus in the stranger, the homeless and those whose life choices differ from our own.

You, my friend, answer His call with the courage of your conviction. Thank you for sharing your blessings with the poor and needy, letting them know they are worthy of God’s love by declaring yours.

Your devotion and courage inspire our work!