Yesterday, March 14, was the 178th anniversary of the birth of Fr. Leo John Dehon, founder of the Priests of the Sacred Heart (Dehonians). Communities and ministries throughout the world commemorated the day with celebrations and prayer. Our Lady of Guadalupe parish in Houston held special Founder’s Day Masses in both English and Spanish. Click here to view the English (Fr. Rafael Querobin, SCJ, was the main presider, Fr. Richard Johnston, SCJ, was concelebrant) and click here to view the Spanish (Fr. Wojciech Adamczyk, SCJ, was celebrant).

Sacred Heart Monastery also celebrated a special Founder’s Day Mass, followed by a luncheon. The community is pictured above after the celebration. Click here to view more photos on the province Facebook page.

In Pinellas Park, FL, Fr. Pat Lloyd, SCJ, was the main celebrant and homilist at the community’s Founder’s Day liturgy. Concelebrating with him were SCJs Bishop Joe Potocnak, Fr. Tom Lind and Fr. Vincent Suparman, who shared a photo from the Mass (below): 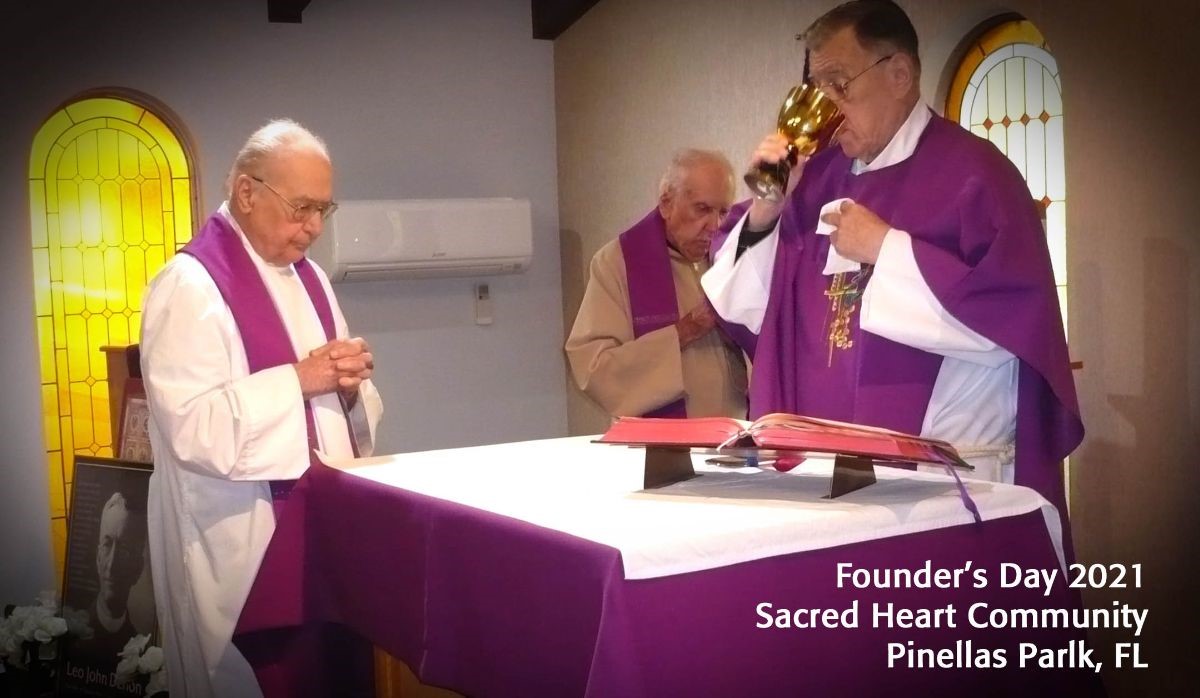 “In such unstable times, what can this anniversary bring us?” wrote Fr. Carlos Luis Suárez Codorniú, SCJ, superior general, in his letter to the Dehonian family. “It is difficult to answer without stopping to think about what happened in the life and times of Fr. Dehon. He too knew a lot about fatal unforeseen events and adversity. He suffered devastating events, such as the conflict of war that ravaged Europe. He became involved in the tensions of a society that was industrializing and generated a very neglected working class. He faced policies, both in France and in other countries, that created difficulties for the Church’s task, and especially for religious life. He was not unaware of the epidemics that fatally plagued large regions of the world. And if we look closely at his own life, he personally knew more than a few tribulations…

“However, despite everything, he did not lose perspective: ‘Every year has its own portion,’ wrote the founder. ‘One must always know how to say fiat!.’ Far from taking refuge in a resigned fatalism, Fr. Dehon assumed everything that happened was a path of conversion and an abandonment to the will of God. With a disposition that matured by intimacy, prayer, and shared discernment, and with his attentive gaze on the world, Fr. Dehon sought to respond to God’s invitation to participate in His own holiness: ‘Yes, holiness is a simple fiat, a simple disposition of the will according to the will of God. What could be easier? For who cannot love such a kind and good will? The soul that sees the will of God in all things, both in the most desolate and in the easiest, receives everything with joy and equal respect.’”