The day after we accepted 3 new novices, two more men completed their novitiate studies and took their first vows as members of the Priests of the Sacred Heart, also known as the Dehonians.  Our name is taken from the Founder of the Congregation, Fr. Leo John Dehon.  The vows were received by Fr. Ed Kilianski, SCJ, US provincial superior, during a Mass in the main chapel at Sacred Heart Monastery / Sacred Heart Seminary and School of Theology.

As a part of this process they will now be known as a “Frater”, which in Latin means, “brother”. Phong “Paul” Hoang and Henry Nguyen came to the community from their family homes in Texas and California. 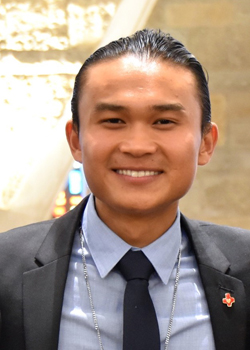 Frater Paul was born in Vietnam and is now a citizen of the US.  His uncle encouraged him to investigate the Priests of the Sacred Heart.  He was attracted to the SCJ community and simplicity of life.  Prior to pursuing his vocation, he earned a bachelor’s degree in biology from the University of Houston. He was active in the Vietnamese Eucharistic Youth Movement and served in parish ministry in Joliet, Illinois and at Sacred Heart Southern Missions in Mississippi.  For fun, Paul enjoys playing soccer, exercising and watching the show, “Game of Thrones”. 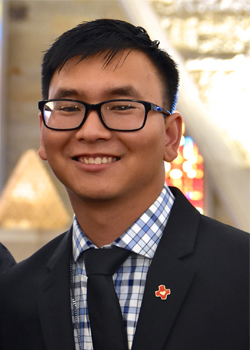 Frater Henry Nguyen was born in Orange County, California and was active in his parish growing up.  During his novitiate year he worked closely with his novice master, Fr. Byron Haaland, SCJ in his ministry to the elderly and disabled residents of St. Anne Center.  He was also on staff as part of the English as a Second Language program at Sacred Heart Seminary and School of Theology.  While there, he learned of the world-wide impact that the Dehonians have from the 40 students around the world where SCJs have missions.

Both Fraters Paul and Henry are now members of the Sacred Heart Monastery Community and will attend Sacred Heart Seminary and School of Theology for their academic studies with the eventual goal of professing final vows and of attaining a Master’s degree in Divinity and priestly ministry.