We, the Priests of the Sacred Heart, have a new religious leader! His name is Fr. Carlos Luis Suarez Codorniú, SCJ. A native of the Canary Islands, he has spent most of his ministry in Venezuela. But his background growing up in the Canary Islands will serve him well in his new position. You see, the Islands are often referred to as the bridge between Africa, America and Europe. Growing up in such a diverse area will certainly help his ministry!

Fr. Carlos Luis was born in 1965, professed his first vows in 1984 and was ordained as a priest in 1990. He even studied English at Sacred Heart Monastery here in Hales Corners.

In an interview, Fr. Carlos Luis expressed his surprise at being elected and joy that he is part of a wonderful family of religious brothers. He is eager to begin, saying “Here I am, I come to serve.” Our Founder, Fr. Leo Dehon, used the Latin expressions; “Ecce Ancilla, Ecce Venio” to express this feeling. 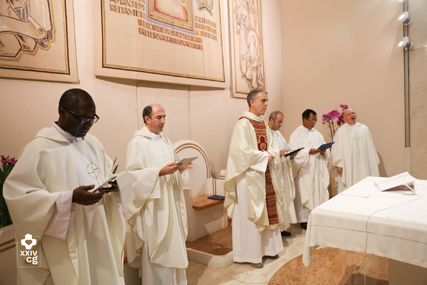 Father is pictured as the main celebrant at the Mass of Thanksgiving on July 22nd at St. John Lateran Basilica in Rome, Italy. This is the same place where our founder, Fr. Leo John Dehon was ordained in 1868.

Along with a new leader, our superior general has a new general council to assist him who were also elected by delegates in Rome.

Our own Fr. Stephen Huffstetter, SCJ was re-elected to serve 6 more years on the general council. Fr. Steve served under the prior administration of Fr. Heiner Wilmer and was re-elected to continue his service to his fellow Dehonians. Fr. Steve is 59 years old and took his first vows in 1982 and was ordained to the priesthood in 1989. Most of his ministry was in South Dakota including director of St. Joseph’s Indian School. He later served as the Provincial Superior for the US Province before being elected to the General Administration in Rome 3 years ago.

As a General Councilor, his primary responsibilities are to oversee Dehonian ministries in North America, Latin America, and India. Fr. Steve’s interests are to establish a common method of teaching based on Dehonian values in our schools and parishes. He particularly enjoys his frequent trips to India to work with the young seminarians. India is a new and growing district for the Congregation.