Dehonian Spirituality includes a monthly reflection and prayer based in the spirituality of Fr. Leo John Dehon, founder of the Priests of the Sacred Heart (Dehonians).

Reflections from Fr. Leo John Dehon, founder of the Priests of the Sacred Heart 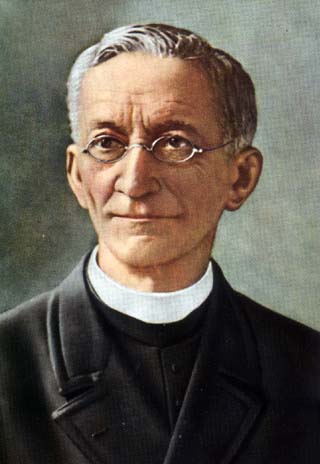 The thought and works of Leo Dehon are characterized by a two-fold movement.  While at the seminary in Rome, he was introduced to the spirituality of the French School of the 17th century, which emphasized union with God in Christ.  Throughout his life, Dehon would be taken with this demand for an interior life, whose goal was to resemble the One with whom he is united.  From this point of view, the kind of priest Leo Dehon would try to be all throughout his life was “another Christ.”  Imitating the Lord of the harvest would be his fundamental prerequisite for apostolic effectiveness.

The other dynamic sprang from devotion to the Heart of Jesus, which he initially learned from his mother.  This devotion, strongly influenced by the message of Margaret Mary Alacoque, the visionary nun from a cloistered convent in Paray-le-Monial, was pervasive in the Church of the 19th century.  It would gradually become the gravitational center of Dehon’s spiritual experience and he wanted to make it the religious wellspring of the Congregation that he decided to found in 1877.

These two sources would mutually permeate and enrich each other to bring about a delicate balance in the life of the founder.  Its driving force was fundamentally Christological, and at its core is the love [agapè] of God, whose visible face is Christ, the Man whose Heart was pierced on the Cross, and has now become the symbolic focal point of all human suffering.

This “Christology of the Wounded Heart” would inspire Leo Dehon to be attentive to the conditions of the lives of the people of his time, in particular those whose human dignity was being exploited and degraded by the spread of industrialization.  And, somewhat against the prevailing trends in his Church, he and some fellow “democratic clergy” were keenly aware that to announce the love of God they first had to demand social justice.  The human condition of the Son of God requires human dignity for all.

This remarkable convergence of justice and love has the potential to create a spirituality for modern times because it takes into account the real-life situation of those who are to hear the Gospel.

Introduction to The Spirit and Life of Leo Dehon, Yves Ledure, SCJ

In your kindness throughout the coming week, please remember in your prayers those who work to make the love of the Heart of Jesus tangible by demanding justice. You may find helpful the following prayer, “In Time of a Pandemic.”

Heart of Jesus,
so grieved to see such lack of love
among Earth’s peoples,
who too easily disregard
the cries of nature,
the moans of the oppressed,
and the tears of the desperate—
touch our hearts and make them like your own.

May we be as pained as you
to feel the anguish of our sisters and brothers,
who call out for justice.
In this time of pandemic,
which has ripped away all pretense
of an equitable social order,
you challenge us to reveal our hearts
and let them be pierced
so that our compassion,
our work for justice,
and our defense of the common good
rushes forth like a mighty stream
and a healing balm.