Reflecting on his vocation in an interview before he was named as bishop, the archbishop spoke about the SCJs and religious priesthood, saying that “I didn’t know that there were different kinds of priests.” As a boy growing up in Umliali, in the Diocese of Aliwal North, South Africa, his primary experience of the Church was through the German SCJs who served his family parish. It was no surprise that when he felt a vocational call that he decided that he also wanted to be a Dehonian. “When my pastor [a German SCJ missionary] asked me what kind of priest I wanted to be I told him that ‘I want to be like you!‘” 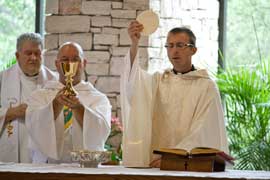